The second weekend of March saw me driving to Holland from London to take part in this massive annual event which is held at ahoy Rotterdam. A big old events centre which at the same time held a Motorcycle show which were show casing all different types of Harley Davidsons and choppers etc. 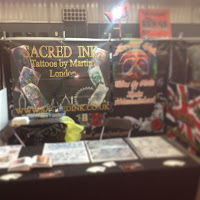 I grabbed 30 minutes and went in and had a look.
Now I’m no biker, but some of these machines didn’t half look lovely. It actually got me thinking that I might have to bring my midlife crisis forward and go out and treat myself to one of these 2 wheeled beauties.

Anyway back to the tattoos.
A busy Saturday and Sunday was had tattooing the lovely people of the Netherlands. My first Tattoo on the Saturday was a convention nightmare!!!! She was a first timer (Not that I have a problem with first timers) and was adamant she wanted it on her chest. I sketched the design, placed the design into the position to be tattooed. Everything hunky-dory so I began tattooing. 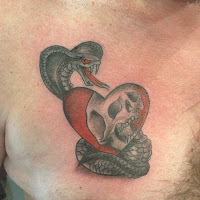 From start to finish she wouldn’t sit still!!!!!! Not what you need when working at a tattoo convention in front of thousands of people. I got the tattoo finished and then proceeded to work on her partner’s tattoo. They both had the same tattoo with slight variations.

Over the weekend I Tattooed all sorts of traditional designs such as snakes, Hearts, skulls and swallows, then it was beer time with the other artists. Remember all that snow that poured out of the sky on the Monday in northern France and southern England??? Well I got caught in it on route back to London. Slowed me up by an hour or so due to the euro tunnel (probably on the English side) balls-ing up. Other than that, that was the only hiccup that occurred over the weekend.
So see ya next year Rotterdam… 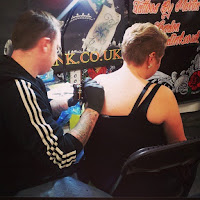