Ok so Sacred Ink™ tattoo studio’s next tattoo convention is in Rotterdam. It's at ahoy Rotterdam on the 9th and 10th of March 2013, the 10th Being on Mother’s day which I totally forgot about :(

I will be driving to Rotterdam again. Door to door time wise it takes 5 hours, it takes longer to fly to Holland than to drive. 7 hours flying 5 hours driving, work that one out! Again that’s door to door.

Get on at Folkestone on the Euro-tunnel then out the other end at Calais for a 3.5 hour drive doing speeds of up to 130Ks an hour, and legally ;) They seem a bit more relaxed in Europe about the speed limits than this nut house. Last year was a busy event. I did some lovely tattoos. I’m hoping to do some more again at this year event. Maybe I’ll get a spare hour to take a break have a beer and maybe put one in a competition. Who knows let see what happens. One of my Dutch regulars John Smit, who I done a tattoo for of Iron Maiden’s Eddie at the Utrecht Tattoo convention will be making it to the show this year as he has put in a request for me to draw up something for him and his missus. The tattoos that I recall doing last year are some praying hands on some American dude and then a flower on some sweet looking Dutch chick who is hopefully there again this year.

On the Sunday I did a load of black and grey tattoos which I seem to get asked to do a lot of. 2 days of solid tattooing and a night of partying with a bunch of tattooists. We were all put on a boat which chugged around Rotterdam, and it was all you could eat and drink which was a nice touch.
So yeah, a good and busy time was had and I’m looking forward to this year’s convention. Though not the lonely five hour drive back to the motherland via a Belgium car park due my wanky satnav… 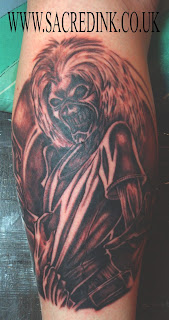 Eddie done at the Utrecht show
Posted by Sacred Ink Tattoo Studio London at 20:24 No comments:

Ok here goes. This is my first blog and I'm not much of a writer so you can have a giggle at my poor grammar. But here is a little about me and my studio which is also on the about me page on my website www.sacredink.co.uk

Martin grew up in London and began tattooing in 1997. He worked in several Leading London tattoo studios before he decided it was time to leave the UK and explore the world of tattooing around the globe.

While traveling he was invited to tattoo in countries such as Thailand, Malaysia, America, Honduras, The Cayman Islands and Belgium. While in these countries he tattooed with many other artists from different cultures, and was able to learn many styles and develop a technique which sees him being able to carry out any style of tattoo.

He returned to the UK a few years later and decided it was time to open his own tattoo studio.

Sacred Ink™ Tattoo studio Brixton was born in 2006. Since then it has established itself as one of the best tattoo studios in south London. In 2008 Martin decided to get into the Tattoo convention circuit. Since then he has Traveled extensively again due to these events and gets to meet other like-minded artists who just want to Tattoo. This has also increased his wealth of knowledge of executing the perfect tattoo. 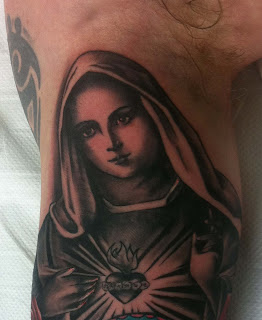 Martin has a no nonsense approach when it comes to executing the perfect tattoo. If it won’t look good, it won’t be tattooed. We are not here to nick your money like a lot of studios. The studio is a tattoo studio, nothing more, nothing less. We don’t do haircuts or nail treatments or any other silly gimmicks like selling ice creams to increase revenue. WE DO TATTOOS… and awesome ones at that. The concept of a true tattoo studio should be modifying the body with Tattoos and body piercings.

In 2011 and 2012 Sacred Ink also became a registered Trademark throughout the UK and Europe.

Martin enjoys tattooing, getting tattooed, painting, traveling and playing the guitar. His shoe size is 11 He is also extremely handsome.
Posted by Sacred Ink Tattoo Studio London at 10:50 No comments: